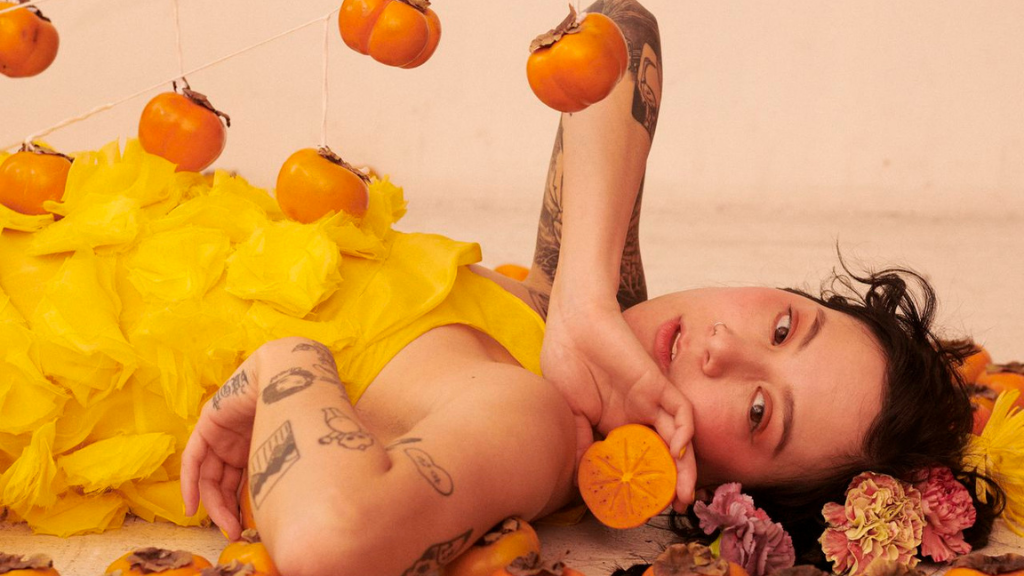 2021 has been a huge year for Michelle Zauner. In April, the indie-pop mastermind behind Japanese Breakfast published her first book, a touching memoir titled Crying In H Mart. An ode to her mother who passed away from cancer in 2014, Crying in H Mart was a heavy project, as were Zauner’s first two albums.

Then came Jubilee. A clear celebration of joy from the first single, Zauner explained to program coordinator Meghan Hockridge that she was “ready to tackle a new theme.” From pushing herself creatively to her unexpected pick for favorite song to play live, the two unpacked Zauner’s exciting new chapters.


I WANT TO START BY SAYING CONGRATULATIONS ON THE ALBUM AND THE BOOK! THEY'RE BOTH SUPER INCREDIBLE PROJECTS.

I WANT TO TALK TO YOU A LITTLE BIT ABOUT WHAT THE TIMELINE WAS LIKE FOR WRITING THE BOOK AND THE ALBUM. WERE THEY KIND OF COINCIDING WITH EACH OTHER, OR WAS THERE KIND OF A CLEAR SEPARATION BETWEEN THE TWO?

MZ: There was a pretty clear separation between the two. I've been working on the book for maybe five years on and off, but for a more concentrated period in the last two or three years. I turned in the rough draft in I think August of 2019, and started writing the record shortly after that while my editor had the manuscript. And then I went back and finalized it in early 2020. So they were kind of separate, but also around the same time period.

DID THE IDEA OF WRITING SUCH A JOYFUL ALBUM, YOU KNOW CALLED JUBILEE! DID THAT COME FROM WRITING THE BOOK OR WAS IT SOMETHING THAT YOU THOUGHT ABOUT KIND OF PURSUING BEFORE THEN?

MZ: I think, you know, since my last two albums were so much about grief and loss, I had been wanting to write about something else for a long time. Because it just was getting really exhausting to talk about that experience. I wanted to talk about other parts of life and the human experience. But I think it wasn't until I wrote Crying in H Mart that it felt like I had said everything I needed to say about that and investigated every quarter of that experience that has occupied my life for so long. I felt really ready to move on and tackle a new theme.

DID YOU FIND THAT AFTER WRITING THE BOOK, IT WAS EASIER TO GET INTO THAT JOYFUL HEADSPACE FOR THE ALBUM?

MZ: Yeah, I think in a way, you know, it was really, really a pretty painful and strenuous process writing the book. It takes a very long time and there's not really any skipping steps in the writing process. So when I turned in the rough draft for the book and sort of shifted gears into something that was much more familiar to me, like writing a record, it did feel like a real sense of relief and joy to be getting back into the album writing process, something that I felt like I knew a lot more about.

DID YOU FIND IT DIFFERENT OR EVEN DIFFICULT TO START WRITING AN ALBUM ABOUT JOY WHEN, AS YOU SAID, YOUR PREVIOUS ALBUMS HAD BEEN MORE FOCUSED ON GRIEF?

MZ: Not really. I think I was just really ready to tackle a new theme. And I think that as an artist, you always want to surprise people and challenge yourself. And, you know, my mom died six years ago, and it's a feeling of grief [that] will be something that lives with me forever. But it's also something that isn't at the forefront of my mind in the way that it was in the first few years after she died. And so I'm just in a place in my life where there's so much more going on that I just felt ready to write about.

WHEN YOU WERE WRITING THIS ALBUM, DID YOU HAVE LIKE DIFFERENT INSPIRATIONS OR MUSICAL INSPIRATIONS?

MZ: I think I was thinking a lot about an artist's third album. And I was listening to a lot of musicians whose careers I really admired, where they were at, four albums in their discography and how I wanted to represent myself on my third album. I really feel like it's the beginning of when you can look at your discography and think of your album in context of the records that you've made before.

And it felt like for a lot of artists, the third record is generally this really bombastic, confident album where all of the things that make you unique as an artist or make you singular kind of come together for the first time. You have it really figured out. So I just really wanted to express that with this record. And I was really inspired by albums like Bjork’s Homogenic and Wilco’s Summerteeth and Fiona Apple's Extraordinary Machine and other artists that were really influential were Kate Bush and Randy Newman.

LIKE YOU'RE SAYING, IT'S NOT THE DEBUT ALBUM OR THE FOLLOW UP TO THE DEBUT. IT'S LIKE YOU'RE IN IT NOW. YOU'VE GOT A DISCOGRAPHY GOING.

SO JUST FROM LISTENING TO THIS ALBUM YOU CAN TELL THAT THERE’S A BIGGER PRODUCTION IT SEEMS LIKE. WAS THAT SOMETHING YOU HAD IN MIND GOING INTO WRITING THE RECORD?

MZ: Yeah, I think naturally the wanting to create an album that felt more confident and ambitious naturally led to, you know, a larger arrangement. I think I also after making two Japanese breakfast records and two records before as Little Big League, I just had more confidence as a producer and a composer. And my co-producer, Craig Hendricks, is a real brilliant arranger. And the two of us just wanted to treat the album like the sky was the limit. So we added a lot more strings and horns and really went for it on this record.

WHAT WAS YOUR FAVORITE PART IN THE PROCESS OF MAKING THE RECORD FROM THE VERY BEGINNING TO NOW?

MZ: One of my favorite songs on the record is called “Kokomo, IN,” and it was a real product of going back to guitar lessons and learning a bit more about interesting chord progressions I could incorporate. And just a little bit more about music theory to kind of unlock a new type of songwriting and then kind of push myself as an artist. [It’s] the first song that I just love lyrically as well and didn't involve any real excavation of personal trauma I've become kind of known for. And so it was a real delight getting to learn that, or realize that you don't have to do that in order to create a song that has depth and meaning. That was a really wonderful part of the process, was learning that I had that in me.

TOTALLY, THAT'S AWESOME! KIND OF WHAT YOU WERE SAYING ABOUT GOING BACK TO TAKE GUITAR LESSONS AND KIND OF PUSHING YOUR CREATIVE LIMITS, DID YOU FIND THAT TRYING TO CREATE AN ALBUM WITH THE NAME JUBILEE WAS A LOT TO LIVE UP TO? WAS THERE A PRESSURE TO MAKE A REALLY JOYFUL ALBUM, AND DID THAT IMPACT HOW YOUR WROTE OR COMPOSED?

MZ: Yeah, I think in some ways having larger arrangements felt that way. But yeah, I was definitely trying to - I think I always have - written largely upbeat music. I think a lot of times when you have heavier lyrics, I've been really into the juxtaposition of more upbeat sounding songs paired with kind of downer heavy lyrical content. But yeah, I think that we were really after a joyous sound.

FROM THIS ALBUM, WHAT IS ONE SONG THAT YOU'RE MOST EXCITED TO PLAY LIVE OR ONE THAT YOU'VE HAD THE MOST FUN BEING ABLE TO PERFORM?

MZ: I've been really surprised with what ends up being really fun to perform. I had a hard time loving “Slide Tackle” for some reason. It was a really fun song to produce, but it just wasn't sitting right for me for a really long time. I kept adding and adding and just wasn't sure by the time I walked away from it if it was working. And then playing it live has been just a real joy, especially having live saxophone. And everyone in the band gets their own kind of solo in a way in that one. That song has been a real surprise favorite of mine to play, and for the audience.

THATS AWESOME THAT IT WASN’T ONE YOU WERE EXPECTING! HOW WAS IT WRITING DURING THE PANDEMIC, WERE YOU WORRIED ABOUT WHEN YOU MIGHT GET TO PLAY THESE SONGS LIVE?

MZ: I mean, it was a really devastating time. And there were so many petty grievances I had about there being a four year gap in my discography and having to sit on this album and not be able to write another one. Because I didn't have that sense of a release and not knowing what to do in my time. It was such a heavy time. And I quickly realized that all of those grievances were very petty and that there was something much more serious at hand. And that, you know, everyone was dealing with this thing together and that I had to contribute to the world in a different way.

WERE YOU SITTING ON THE RECORD FOR A WHILE, WAITING FOR THINGS TO KIND OF CHANGE IN THE WORLD?

DID THAT KIND OF CHANGE AT ALL, YOUR MENTALITY ABOUT HOW YOU THOUGHT ABOUT THE ALBUM BEFORE IT CAME OUT?

MZ: I tend to like my albums a lot more when there's more space behind me. You know, I think there's so much uncertainty when you first finish your record. You're not sure how you feel. And I think that a year later, I still felt really great about the songs. And that gave me a little bit of distance to just be really proud of what I made and ready to give it to the world.

LIKE YOU SAID, YOU WERE PLANNING FOR THIS BOMBASTIC THIRD RECORD. DID YOU FEEL A LOT OF PRESSURE FOR YOUR DISCOGRAPHY GOING INTO THIS RECORD?

MZ: I'm sure there was, but I first thought it felt like there was so much more pressure for the sophomore slump. You know, I really felt like Psychopomp was a real fluke for me as the debut album. And I had never experienced that kind of recognition before as an artist.

So I was much more terrified about the second album than this third one. I felt more confident in my ability. And I think ultimately you can only make what you are interested in making, you know? And so I just try to remind myself to chase what interests me and just hope that other people can enjoy that.

MH: I LIKE THAT YOU SAY YOU FOCUS ON MAKING SOMETHING YOU’RE INTERESTED IN INSTEAD OF TRYING TO GUESS WHAT PEOPLE WANT.

MZ: Yeah. I mean, I think that people honestly can sort of smell it a mile away when you begin to pander. And I think that that's like the most uninteresting thing that you can do as an artist. And at least if you fail pursuing something that you're interested in, there's no one to blame but yourself.

I MEAN, AT LEAST IN THAT CASE, YOU'RE STILL LEFT WITH SOMETHING THAT YOU YOURSELF ENJOY.