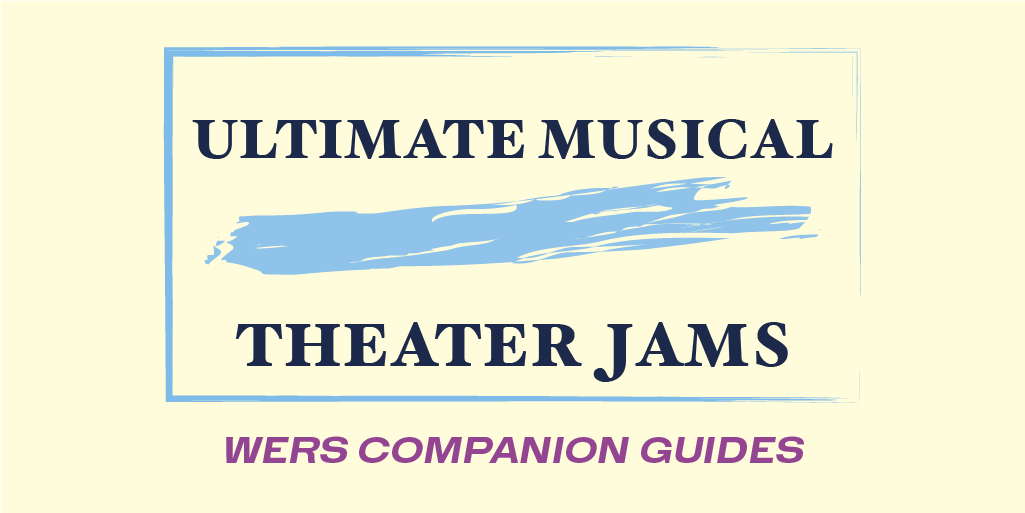 One of the most beloved programs here on 88.9 is Standing Room Only (SRO), our show dedicated entirely to musical theater! In honor of all of our loyal SRO fans, we recently launched an SRO Facebook Group, where lovers of the show can bond about all things musical theater. Come and join in on the fun today by signing up here!

Throughout the creation and launch of this group, the student and professional staff have been talking "Non-Stop" about the more than "525,600" Broadway hits we all love (sorry, I know that was incredibly low-hanging fruit, but I had to do it -Lily the Blog Editor, keeping herself entertained). From Anatevka to Hadestown and The Land of OZ, we're traveling across the many stages and bringing you some of our staff's favorite musical theater jams. They are:

I have very fond memories of this tune, and not just fond memories; a LOT of memories. I must have rehearsed it at least forty times over in my high school’s production of Mary Poppins. The tune is just so seeped in joy and blissful energy that listening to it now takes me back to nights promenading around the set of the park scene in Edwardian costume while spinning dainty umbrellas. (The umbrellas posed some problems moving around backstage – a few eyes nearly got poked – but we didn’t let that kill the joy…) The last part of the tune is what peak euphoria feels like, as the orchestra swells and the full chorus belts out the melody and counter-melody; It takes a lot of self-control not to join in!

A man-eating plant from space can't survive off insects. In this number, Audrey II convinces Seymour to expand his dining options. With echoes of rock and roll, Doo Wop, and soul, it's a funky and deviously hilarious part of the show. On my way to being inducted into the National Thespian Society, I took the role of Audrey II in high school, channeling Levi Stubbs (of Motown's The Four Tops).

Don't get me wrong, I love Neil Patrick Harris' interpretation of Hedwig, but I'm partial to John Cameron Mitchell's vocal performance. I was introduced to this show through the movie, and I seriously consider it one of the best musicals of all-time. Serious props to Mitchell – who is also the playwright of the theatrical version – for blending the bravado and flair of Broadway with classic '90s rock and roll. "Wig in a Box" is the song I throw on whenever I want to feel like a badass and confident lady, just like Hedwig. As the song progresses, the instrumentals and vocals build in power and tempo to turn into this head-banging, hair whipping rock ballad. Miriam Shor's (Hedwig's lover Yitzhak) harmonies are the icing on the cake. If you wanna feel good, throw this track on!

The RENT movie soundtrack is essential car-listening for me. If I’m driving down the highway, there’s an incredibly high chance I’m belting out one of those tunes and playing air guitar at stoplights. “Another Day” is sung between characters Roger and Mimi as she tries to begin a relationship with him while he resists. There is so much emotion poured into this song – anger, pleading, love, determination – and it’s an absolute bop on top of all of that. I especially adore how Adam Pascal (Roger) gives his all into the performance and delivers his lyrics like a rockstar. “Another Day” is the ultimate jam to really let loose with the soaring electric guitar. You will absolutely love this mix of theatrical and rock and roll stylings.

The music of Fats Waller was the centerpiece of this musical that celebrated Black culture during the Harlem Renaissance era. A fun, flirtatious tone is alive between the cast members and even extends to the audience at times. Ken Page opens this number, later joined by Tony winner Nell Carter. The two build up to a soulful, unexpected fever pitch that gave me an appreciation for the expression "light my fire."

"Some Kind of Paradise" – The View UpStairs, Original Cast Recording

This new show came to Boston at the SpeakEasy a little over a year ago. It shook me for the way it merges the tragic and true history of the UpStairs Lounge in New Orleans with the dreams and victories of LGBTQ+ people today. This song is so SO joyful and imagines a world where the fighters of the past are able to enjoy the rewards of the future. It's not a perfect paradise.... just "some kind."

"In My Own Little Corner" – Rodgers and Hammerstein's Cinderella, Original Broadway Cast Recording

This musical is a wonderful classic that came to the Emerson Colonial Theatre last December. I've always loved this song and, to me, it's about making your own joy and taking control of your own happiness – even when it seems like a lot is out of your control (very appropriate for right now!). It's whimsical and fun, encapsulating the magic of the show while giving hope. This song is also special to me because it's the song I sang at my very first voice recital, back when I was twelve years old. 🙂

When I first heard this cast recording, I couldn't have been more confused. That being said, I had it on shuffle. When I listened to it again, thanks to a strong recommendation by a close friend of mine, I uncovered the true beauty of the show. This album isn't like any musical I've ever heard or seen before. Ryan Scott Oliver, who wrote the lyrics and music for the show based on photographs taken by Matthew Murphy, creates this brilliant mashup of musical theatre, photography, and pop/rock/country music. This musical is made up of "snapshot stories" where all of the songs are based on what Scott Oliver saw in the pictures taken by Murphy. In this instance, "Leave Luanne" is based on an image of a stuffed deer head with human arms. Crazy enough, it is not about a deer but rather a woman trapped in an abusive marriage where she believes her only way out is suicide. The man in the song, seemingly unaffected by his ex-wife's death, is then haunted by her soul. The music is crafted in such a unique way that it has this country, twangy, dramatic, Broadway-feel to it with climaxes galore. Personally, I hate country music, but this is one of my all-time favorite songs to sing in the car on my way home from work. If you have a few extra minutes, listen to the whole album – not once but twice, and not on shuffle. That was my first mistake.

I saw this with my daughter at the Wang in 2019 and it was a party we'll never forget! Blasting neon colors, huge, gorgeous voices, dizzyingly creative costumes and so so so much love and heart. This song in particular is the pick-me-up of pick-me-ups – highly recommend for daily listening in 2020.

I made my theatrical debut in the first grade as the color purple in my Catholic school's rendition of Joseph. In preparation, our music teacher showed my class the movie adaptation. From that moment on, little me was hooked to the soundtrack. Every Easter from first to fifth grade, I would shut myself up in my room and perform a one-woman show of this musical. Yes, that means I played all of the characters, from Joseph to all eleven of his brothers and even the Elvis-inspired Pharoah. "Go, Go, Go Joseph" was always my favorite song to "perform," and is still a favorite song of mine to jam out to. From the tune's upbeat tempo to Donny Osmond and narrator Maria Friedman's buttery vocals, this jam will make you want to slap on your pair of rollerblades and skate around your prison cell (Literally, watch the movie, that's what happens!). Best end to a first act EVER!

"This Is Me" – Camp Rock, Original Motion Picture Soundtrack

It was hard to forego the chance to write about my newfound love for the Hamilton soundtrack. However, I have to give recognition to possibly the most transformative movie from my childhood. After all, this is me. Camp Rock’s 2000s pop-rock soundtrack shaped my taste in music, but “This Is Me” especially created countless fun memories. It’s a duet between Demi Lovato and Joe Jonas, so whether I was with a friend, cousin, or my sister, we’d always pick one person’s part and dramatically re-enact the performance. Usually, by the end of the song, we’d get too excited to stick to one part and do embarrassingly horrible vocal runs compared to Lovato.

The Alternative Sound of Summer 2020