Show Review: Walk Off the Earth Burns Bright at House of Blues

Continuing their 2019 world tour, Walk Off the Earth finally arrived in Boston to perform their signature blend of original and cover songs (the band first blew up with a cover of Gotye's "Somebody That I Used to Know,") to the delight of Boston fans.

Things got off to a strange start…

As the lights shut off, signaling the start of the concert,  the audience was greeted by a TV screen turning on at the back of the stage–not a usual band entrance. A “live stream” skit from the band showed them setting up in the green room, before getting a call from their manager and realizing they were in the wrong venue. They quickly piled into a red sports car, and the video cut between them in the car driving furiously and shots from the opening of the Edgar Wright movie Baby Driver. Finally, after making a clean get-away from the cops, Walk Off the Earth entered the stage to thunderous applause.

The perfect marriage of sight and sound

The band kicked off their setlist with an original song, and it was clear that they had been working on perfecting their act all tour long. The stage was lit by red lights from giant glow sticks as they burst into the song “Fire in my Soul.” The following song removed the glow sticks and instead a cool blue light shone down from above. Throughout the set, not only were the songs something to admire, but the lighting and effects also brought the spectacle to a whole new level. From a disco ball reflecting all colors of the rainbow, to the classic single spotlight on a lone acoustic guitarist, the band clearly put as much effort into their visuals as they did their songs.

Something old, something new

Walk Off the Earth have a plethora of catchy, fun and witty original songs, but what is arguably their most defining musical attribute is their ability to adapt the works of others. Two of the songs to kick off the night were acoustic covers of the songs “Hey Ya!” by Outkast and “Teenage Dirtbag” by Wheatus, both unusual songs to cover in an acoustic format. But the ingenuity only continued as they brought out their full arsenal of absurd instruments, including performing “Girls Like You” by Maroon 5 on a giant guitar that took 3 people to play. To top it off, they sang a mashup of several pop songs on a set of pipes attached to a xylophone stand.

A tribute to “beard guy”

While the concert was a fairly lighthearted affair, there was no avoiding the fact that the band was missing a member of their lineup, Mike “Beard Guy” Taylor, who tragically passed away last December. The band played several songs in tribute to him, encouraging the crowd to sing along to a video of Beard Guy playing Bohemian Rhapsody and performing a new song, “Mike’s Song." During the encore, the band played their song “Hold On (The Break)” in his honor, and the crowd showed their respect by turning on their flashlights and shining them through paper blue hearts that fans were giving out to the crowd. Finishing up the concert with the triumphant original song “Rule the World,” everyone left the concert with a smile both on their faces and in their hearts. 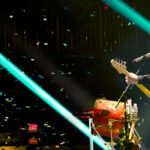 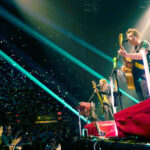 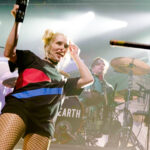 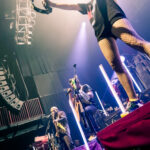 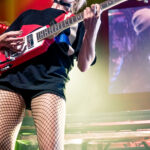