The Record Company at House of Blues

From Diverse Opener to Killer Headliner

On Friday evening, The Record Company performed at the House of Blues in Boston. The American rock band trio from Los Angeles first came together in 2011. The core members Chris Vos, Alex Stiff, and Marc Cazorla gained recognition in their early years as a diverse opening act for a wide variety of artists. Everyone from John Mayer to B.B. King has sung their praises, giving them a unique voice with their blues and punk influenced music. In 2016, The Record Company made the leap to headliner with their debut album Give it Back to You. The album received critical and commercial acclaim and launched the trio into stardom.

Now, two years later, the band is riding off of their second release with Concord Records, All Of This Life. The Record Company has continued to push the boundaries of the rock n roll genre with an ever-maturing sound. This album contains tracks that are more soulful, more bluesy, and more hard-hitting than we have ever heard from this group.

Fans were well aware of the talent they were coming to see on Friday evening, as the venue quickly filled with a diverse collection of people from all walks of life. There was a sense of excitement throughout the hall, and this sentiment continued with the Record Company’s lively opener J. Roddy Walston & The Business.

More than one person in the audience knew about the opening act, with one boisterous fan yelling, “J. Roddy and Chris Vos? It’s like seeing two for one!” The band was welcomed with open arms and launched straight into their tight hourlong set. ‘The Business’ is made up of Steve Colmus (drums), Logan Davis (bass), Billy Gordon (guitar), and of course J. Roddy Walston himself (piano/vocals), each with hair longer than the last. The group’s wailing antics threw the crowd into a raucous frenzy and left everyone with a gaping smile on their face. Weaving seamlessly between every track on their set, J. Roddy’s blues-rocking quartet served as the perfect primer for the act to come. Many were surprised by just how spirited they proved to be. Talks of their set continued even after people had begun trickling out at the end of the evening.

However, the true gem of the night was without a doubt, The Record Company. The trio made their way to the stage around 90 minutes into the concert runtime. With little more than wave to their crowd, Cazorla (drums/keyboard), Stiff (bass), and Vos (vocals/guitar) burst into their rousing opener “Baby I’m Broken.” The booming percussion rocked the packed house, raising the bar from the very first note. A static filter on the lead microphones for whole track lent the vocals a unique blues-rock texture. By the end of the song, the crowd was practically breathless. It was a truly remarkable arrival.

Every member of the band was a talented multi-instrumentalist. There appeared to be an endless revolving collection of guitars and basses with the occasional keyboard thrown in the mix. Chris Vos, who’s dancing skill should not be underestimated, flew from one end of the stage to another. He dug deep with his gravelly voice but didn’t steer clear of falsetto for the slower pieces. There is no doubting that he is a born performer. In one show he gave memorable solos on an acoustic guitar, an electric guitar, a steel pad, and a harmonica. The crowd wasn’t shy about recognizing his instrumental prowess either. The whoops and hollers that followed every track only got stronger as the night wore on. By the time Vos hopped on the mic and said “This next song is about a little disaster named Rita Mae Young,” fans up front weren’t missing a single lyric. 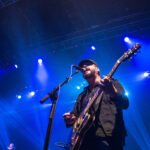 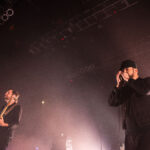 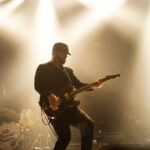 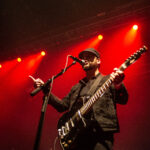 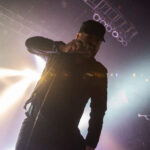 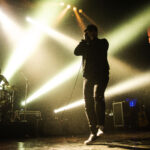 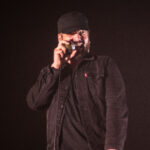 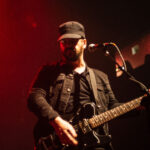 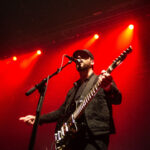 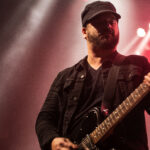 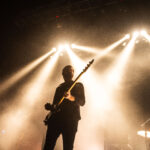