When I stepped into the House of Blues, I was intimidated by the predominantly Millennial and Gen-X audience. The people around me were huge fans and familiar with Sleater-Kinney's music. I, on the other hand, just kept an open mind for a band that I didn't know. However, I did enjoy the atmosphere in the House of Blues; I felt everyone else's passion for the band as couples and friends gathered together for the concert. I loved that communal feeling.

The backdrops were ghoulish to remind everyone that Halloween was just around the corner. On the other hand, everyone was expecting to have a good Tuesday night, and Sleater-Kinney gave us just that. Their performance for The Center Won't Hold tour made a huge impression on everybody. Corin Tucker and Carrie Brownstein's on-stage presence didn't fail to excite the audience, who screamed with joy until the end of the night.

Starting off the night with "The Center Won't Hold," the band set up the high energy of the night. I first felt this big, vibrating rumble from the music. Then, Tucker and Brownstein's amazing voices exuded so much power and passion. The crowd was roaring and full of excitement while the beat of the drums became more and more intense. Then, there were these bright white lights flashing on and off.

"Fuck you! We're not a friendly city!"

Aside from performing well, Tucker and Brownstein loved conversing with the audience. After "Bury Our Friends," Tucker mentioned that Sleater-Kinney performed in Boston before and loves the city. She also gave us the compliment of being friendly, but that was met with some uncertainty from the crowd. The band was pretty amused and after a bit of laughter, Tucker said it's funny that Boston gets mad about being a friendly city. Before moving on to "The Future is Here," Tucker jokingly screamed, "Fuck you! We're not a friendly city!"

During the concert, I fell in love with the raw moments Sleater-Kinney captured.

"The Future is Here" has these raw lyrics about being alone and needing someone to stay. The suspension behind the sound of the drums, plus the vulnerability of the words, was really cathartic for the audience. Right after "The Future is Here," the band played "Jumpers," with Brownstein moving around and playing her guitar on her knees. I liked that Sleater-Kinney's songs had a mixed pattern between booming energetic songs and more mellow, lower energy songs. The variation never bored the audience and kept us anticipating more good moments to pass.

Brownstein took a few moments to talk to the audience about being present and taking action for what you care about.

Right after everyone finished grooving to "Bad Dance," Brownstein said, "It's been a lovely time," and showed gratitude for Boston's big welcome to the band. She wanted to remind the audience that, "It's good to show up for the things you care about, for the people you care about." Brownstein also emphasized the importance of voting, and told us to get Trump and Pence out of office in 2020.

But, Brownstein was humorous, too. When she heard a couple mention a more mellow song as one of their wedding songs, she asked, "Are you joking?" But the couple wasn't, so Brownstein responded with a "thank you."

The show ended with "Entertain."

I enjoyed the build-up of excitement that "Entertain" provided the audience, and the chorus satisfied our hunger for a tonal climax. The intense outbreaks of the guitars and the drums, and the consistent power behind Brownstein and Tucker's voices made everyone jump, scream, and shout.

The last moments of the concert were bittersweet. Corin Tucker and Carrie Brownstein put in their all, and the crowd absolutely loved it. But then, Brownstein gave her thanks, and the show ended. Everyone was still screaming even though the band left, and no one wanted to leave once the show was over. All of Sleater-Kinney's fans lingered in the House of Blues and still talked to their friends, partners, or anyone at the concert. 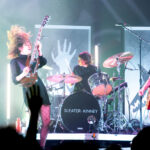 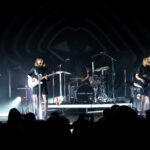 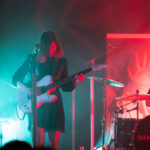 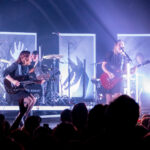 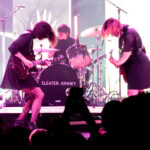 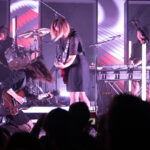 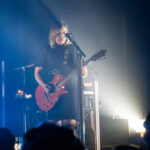