As Weyes Blood took the stage at the Rockland Trust Bank Pavilion, the venue became awash in an otherworldly red light. The audience had left Boston, and were in Weyes Blood’s world now. The 31 year-old singer/songwriter's ethereal, dreamy tracks seem to encapsulate the past and present of music simultaneously. Earlier this year, she began touring her newest record, Titanic Rising, and stopped in Boston while opening for country star Kacey Musgraves.

The artist started off her set with “A Lot’s Gonna Change”, the opening track from her newest album. Coming together with a five-piece band, the lush orchestral arrangements present on the singer’s newest album found their way onstage perfectly. “A lot’s gonna change/in your lifetime” sang Weyes Blood, seemingly speaking to everyone in the crowd. Her performance felt like a keen visual representation of her album — expansive and seemingly infinite in scope.

As the night went on, songs from Weyes Blood’s past and present came together in new ways.

“Used to Be,” from her 2016 album Front Row Seat to Earth took on a new perspective when performed alongside her newest material, showing the folk foundation of her artistry. It complimented well with songs like “Everyday,” which veers toward the folkier side of her discography. It was a triumphant moment in Weyes Blood's set, as the artist sung about her frustrations with modern dating. Fans agreed, singing along as loud as they could.

However, some of the night’s best moments came from the slower songs in Weyes Blood’s repertoire.

“Something to Believe,” a standout from her latest album, became even more affecting and sweeping when performed live. Performing at a large venue such as the pavilion allowed the song’s cathartic energy to spread across the audience. “Picture Me Better” was another emotional moment during the show. Before starting the track, Weyes Blood encouraged the audience to embrace their loved ones in the audience. The song’s tender lyrics became even more so when seeing audience members cherish those who they love.

A song unlike anything the artist has made, the stage became flooded with flowing blue light, echoing the underwater cover of her album. Synthesizers began looping and the song's ethereal atmosphere made its way into the audience. It was as if crowd was taken into a new galaxy throughout the song's duration. Weyes Blood and her band left the stage after the song's explosive finale, but her phenomenal set was sure to stick with her audience for much longer. 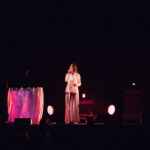 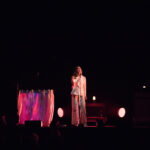 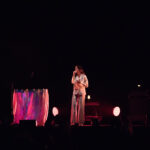 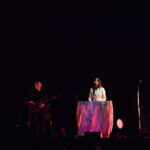 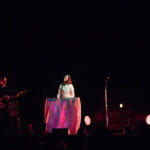 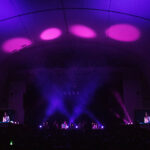 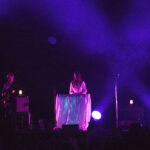 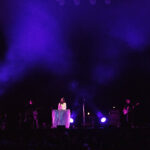 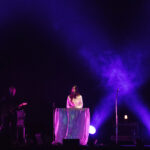