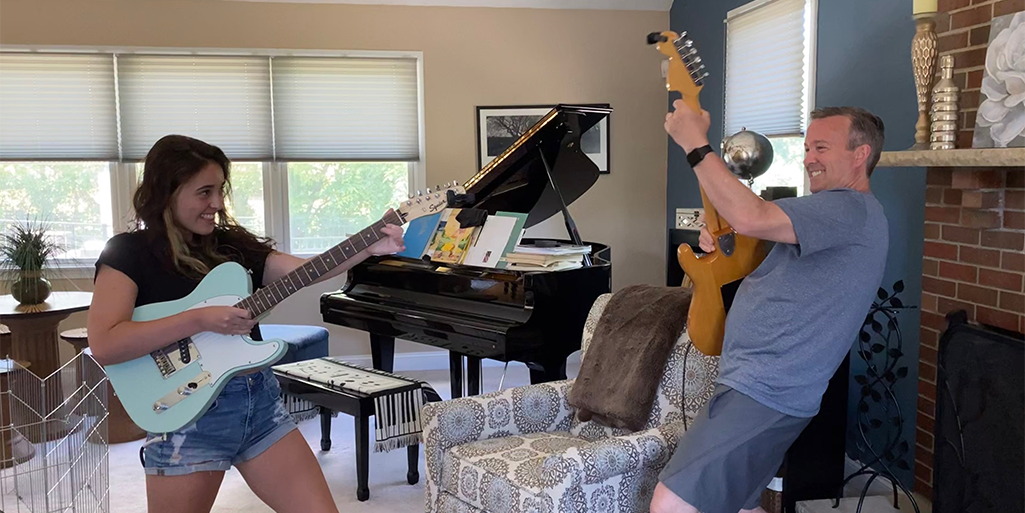 Megan and her dad 🙂

You may be thinking to yourself, "I’m a dad, I like rock music, but what is dad‒rock?"

I’m here to tell you that you already listen to it. Dad-rock is all of the rock music that I and my fellow Gen‒Z people first heard from our dad’s CD collection. In the spirit of Father’s Day, I’ll be flooding this post with not only dad jams, but also dad jokes and stories. For instance:

What kind of music are balloons afraid of?

Are you thinking about it? Don’t cheat and try to find the answer here first.

It’s pop music. We’re more of alternative music fans here at WERS, so I understand the fear of the balloons, even if we have different reasons for our music taste.

Happy Father’s Day to all the dads, grandpas, godfathers, and uncles out there! Thanks for letting us steal your sweatshirts, hats, and food. But, most of all, thanks for introducing us to the elite genre that is dad‒rock. Writing this playlist has made me wish I grew up in the dad era to see these iconic artists perform as they were dominating the music scene.

Like a dad at a restaurant who just paid his bill would say, "You ready to rock and roll?"

I’m kicking off the playlist with this dynamically energetic tune. A rocking guitar riff and a solo with lead singer Eddie Vedder’s somewhat angry‒sounding vocals are the stars in this song.

Dad‒rock music usually comes from the ’70s and ’80s, not the ’90s. However, Pearl Jam created the longest dad‒off I’ve ever witnessed, so they had to be acknowledged here. For the past few years, every time my two uncles from opposite sides of the family know they’ll be seeing each other, they make sure to wear their best Pearl Jam gear. It’s a competition filled with conversation, “subtle” brags, and belly chuckles that never end. The level of dad‒ness this exudes... it doesn’t get Eddie Vedder than this (get it?).

Bruce Springsteen and his music are beloved by countless dads. For decades, he’s created danceable rock tunes that get the dads to shamelessly bust out their horribly amazing moves.

However, “Western Stars” differs from the typical sound from his mega-famous hits. It’s a mellow acoustic jam from his latest record that we’ve been loving and keeping in the mix on‒air. What can we say? He’s born in the U.S.A., born to run, and we’re born to play his music.

If there’s one band that defines my childhood because of my dad, it’s The Beatles. From the day I was born, he’s been training me for the standard quiz everyone faces in their life, where you have to immediately name who in the band is singing. I haven’t run into this test yet, and I can’t say I’ll ace it if the time comes. Although I love The Beatles, this is not an invitation to practice more. I’m talking to you, dad.

"The End" may not be as popular as the many monstrous Beatles hits, but it's still a classic in my book. It kicks off in true rock fashion with big drums and an electric riff. My dad always starts air‒drum battles in the car to this part. The band goes on to flaunt their musical range in the latter third of the song with peaceful‒sounding piano and clean guitar completing the track.

"One Way Or Another" — Blondie

For all the dads out there who reveled in the new wave and punk scenes from the ’70s and ’80s, this one’s for you. Unless one of your kids was a major One Direction fan, you might not know that the British boyband covered this song, ultimately making it a recognizable song for my generation. However, a lot of the people around my age don’t realize that this iconic rock ‘n roller belongs to Blondie. It kills my soul.

Growing up as a girl, I absolutely loved seeing female-fronted bands. It made it easier for younger me to see myself as capable of being as powerful and influential as them. So, thank you to all the dads keeping Blondie’s gems in rotation. You’re doing more for your daughters than you, or even she, might realize.

"Change Of Heart" — Tom Petty and the Heartbreakers

Even though this track was created in the ’80s, it reminds me of the early 2000s pop-rock I heard on the radio growing up. The guitar riff is an earworm in itself. Arena-filling drum sounds and the vocal melody transform the song into an amazing classic.

Now for the dad story: My little sister’s a dad‒in‒training. She copies my dad’s posture, has adopted routine phrases like, “what’s the good word,” and wears his clothes. Tom Petty played a big role in helping her reach her goal and pull off the ultimate dad joke. A few years ago my family and I went paragliding. At the place we went to, they made videos of everyone flying in the air. So, when it was time to pick what song you wanted to play in the background of your video, my sister saw her dad‒ertunity. You might already know where this is going. But, to sum up, we now have a video of my sister paragliding with her arms out to the sides to the song “Free Fallin’.” The commitment to the joke was astounding.

"Burning Down the House" — Talking Heads

When I told my dad I wanted to add a Talking Heads song, he insisted on this one. Fast forward to now as I’m writing the post while playing the track for inspiration. He just shouted “nice song” from the living room. I could hear the smirk in his tone alone. He knew he cracked a solid one and was proud of it. Certified dad joke caught in action.

"All Along the Watchtower" — Jimi Hendrix

Jimi Hendrix turned Bob Dylan’s “All Along the Watchtower” into a rock ‘n roll classic. With his innovative style, Hendrix pioneered numerous ingenious ways of playing electric guitar. He combined fuzz, feedback, and distortion to create his own musical form that influenced countless musicians.

About a year ago I was at a restaurant talking about Hendrix, and a dad at the table next to me excitedly told me he was surprised I had even heard of him. So, all you dads reading along will be happy to hear Hendrix is still relevant with some college-aged kids. I’ve met quite a few people around my age who strive to be as incredible at the guitar as Hendrix specifically. I don’t know if that’s possible, but as long as they’re recognizing his unmatched talent, I’ll support it.

Got another routine trivia question my dad loves to ask: Do you know where the band Boston is from? It’s a tricky one. I’ll give you a second to think about it.

Did you get it? Okay, I’ll stop stalling.

I just had to make sure you wouldn’t cheat by looking down here first. So believe it or not, the answer is in fact Boston. Crazy concept, I know. It’s almost as if they were inspired by a certain band from Chicago. I can’t quite place the name. Anyways, the blues-driven rock track “Smokin’” showcases Boston’s musical range. Electric riffs, upbeat drums, cool keys, and a bluesy bass lick take over the back half of the track for some classic rock fun. Just by hearing this tune, I can envision the long, wavy ’70s rocker haircuts headbanging along.

"Up Around The Bend" — Creedence Clearwater Revival

Buckle up, we’re going “Up Around The Bend” of the playlist to this swamp rock jam. It’s perfect for those who have ever wanted to leave the city and corporate life behind for a simpler existence. The twangy guitar screams course through every dreamer’s and escapist’s bones.

Creedence Clearwater Revival, or as my dad says, "the old farts like me call them CCR," has so many country‒fueled rock classics. However, this quick, upbeat tune takes first place for me. As I listen to this song, I can picture myself driving on an open road like Thelma and Louise with the wind tangling my hair.

Hopefully, you’re still standing after all, my attempted dad jokes. We might have to keep practicing to reach true dad‒level. But if you made it this far, you’re looking like a true survivor. Turn on this playful rocker if you need to recover from my cheesy puns. It gives off a youthful, carefree feeling with its melodic organ and groovy guitar riffs.