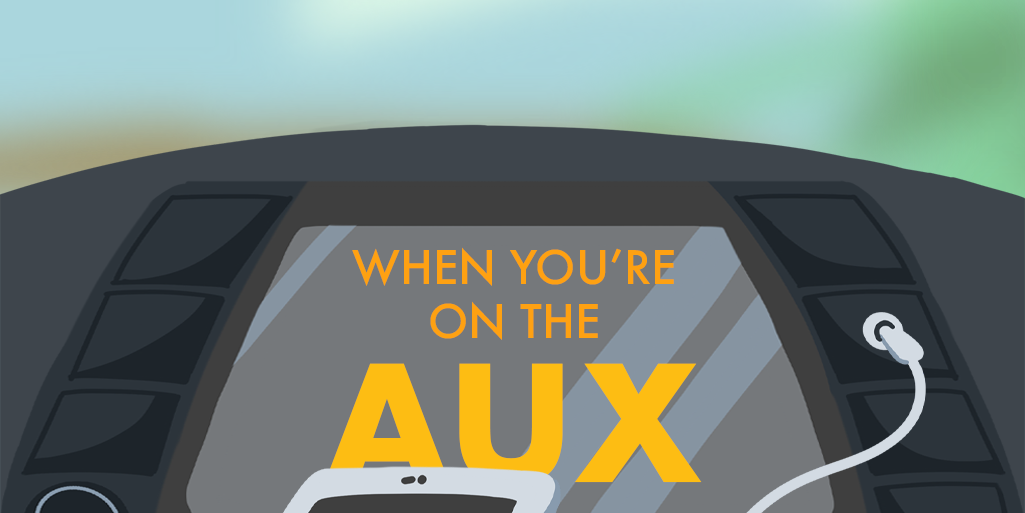 Picture this: You’re in the car with friends or family and, without warning, they tell you to put on some good music. As you go to connect your phone using Bluetooth, you desperately search for songs everyone will love. They have to be popular enough that most people know them, but not so popular that they’re overplayed and predictable. Panic starts setting in. What happens if you start playing your first, and seemingly strongest, song choice, and they tell you to hit skip? Or worse, what if everyone sits in silence because you failed in crafting an instantly lovable playlist. You’ll never be trusted to be put on aux duty again! How embarrassing.

Okay, maybe that was a tad dramatic. But you get the point. The person controlling the music sets the tone of the car ride, the day, and even the upcoming adventure. Driving while wholeheartedly scream-singing with close ones is an exhilarating feeling. Did you know that’s actually why there's the phrase “the journey’s better than the destination”? Don’t fact check me on that one. But seriously, an upbeat, unifying playlist can make a trip so incredibly fun you take a few extra turns to prolong the ride. Conversely, a bad playlist can make for an extremely dull, awkward, and forgettable moment. Next time you’re given the aux, skip the panic and blast this playlist.

Five years after his self-titled debut album and breakout song, “Take Me To Church,” Hozier proved he wasn’t another one-hit-wonder with his first number one album, Wasteland, Baby! The Irish singer strayed from his typical solemn sound with “Almost (Sweet Music).” It’s a fun, vibrant ode to the jazz era with references to Duke Ellington and more. He stopped by the Wang Theater last fall for two sold-out shows, and WERS Blog Editor Lily Doolin talked to him about the chaos that inspired the amazing record. You can read that interview here.

Remember when Lorde’s “Team” and “Royals” were constantly on every radio station and playlist? Well, I decided it’s time to bring that back. It’s already somehow been seven years since Lorde absolutely dominated the pop music scene. I know, I refuse to believe it was that long ago too. However, that means playing her debut jams and reminiscing is long overdue.

You may not know Conan Gray yet, but I've got a strong feeling his name will be everywhere soon. He just released his debut album, Kid Krow, earlier this year in March. It blends ‘80s synth beats and vulnerable bedroom pop with an eerie Pure Heroine-era Lorde vibe. In “Maniac,” Gray’s lyrics walk the line between expressing anger and amusement. It’s primarily about his ex spreading rumors about him, which naturally he feels annoyed with. But then, he sarcastically calls himself a “stalker, a watcher, a psychopath” in the chorus to mock his ex. To sum it up: "Maniac" is upbeat, fun, and will start the ultimate dance party.

There’s no need to explain what “Let’s Go Crazy” sounds like or who Prince is. Regardless of age, everyone should know who this funk-rock pioneer is. As its name suggests, “Let’s Go Crazy” is wildly vibrant and danceable. What’s more fun than dancing and singing along to a track as lively as this? I’ll answer for you - nothing! You, your friends, family, and the people in the car driving next to you better be straining your lungs, throat, and voice to shout these lyrics at the appropriate volume. Oh, and you should take a note from the song and go utterly wild.

"Are You Bored Yet?" – Wallows ft. Clairo

If you know and love Clairo, Peach Pit, or half alive, it’s time to jump on the Wallows bandwagon. They’re an upcoming alternative rock group based in Los Angeles. “Are You Bored Yet?” happens to be the first single released from their 2019 debut album, Nothing Happens. It carries a dreamy coming-of-age movie sound while lyrically, a couple deals with their impending breakup. The story unfolds from both perspectives as each express uncertainties about their future together. Even though they’re tired of their relationship, this song is anything but boring. It’s bouncy and sounds very Clairo-esque, even though the only part she wrote was the second verse. However, she did write her verse in about 15 minutes and then recorded it. She’s a true pro.

The fact that I haven’t included any songs from the quintessential Nirvana record Nevermind on any of my playlist posts before is beyond me. I earnestly apologize, but I’m here to redeem myself and promote this incredible tune. Everybody in your car has to drum along to make the chorus hit harder. You can use the steering wheel, dashboard, chair, the air, or your friends as the drum kit. It’s for an imperative cause, so it’s not optional. Sorry, I don’t make the rules. (Well, maybe I do but shh).

If Nirvana’s one of your favorite bands, I highly recommend checking out Post Malone’s tribute to the grunge group on YouTube. He and his band even wore dresses similar to the famous floral one Kurt Cobain wore. However, the most Nirvana-like aspect of the cover set was them not performing the classic “Smells Like Teen Spirit.” It's very Cobain of them.

If you can dance, and you can jive, then you can live up to the title of this renowned track. So, bust out all of your favorite moves because we all can, and should, be the dancing queen. If this song doesn’t make you want to wiggle and wave in your seat, there’s no saving you. I don’t think any word I write could drag out your inner dancing queen. But, the good news is that singing and dancing is contagious. So, be the leader of the pack and initiate the dancing. Everyone else should follow, and if not, get new friends. Just kidding of course (but not really).