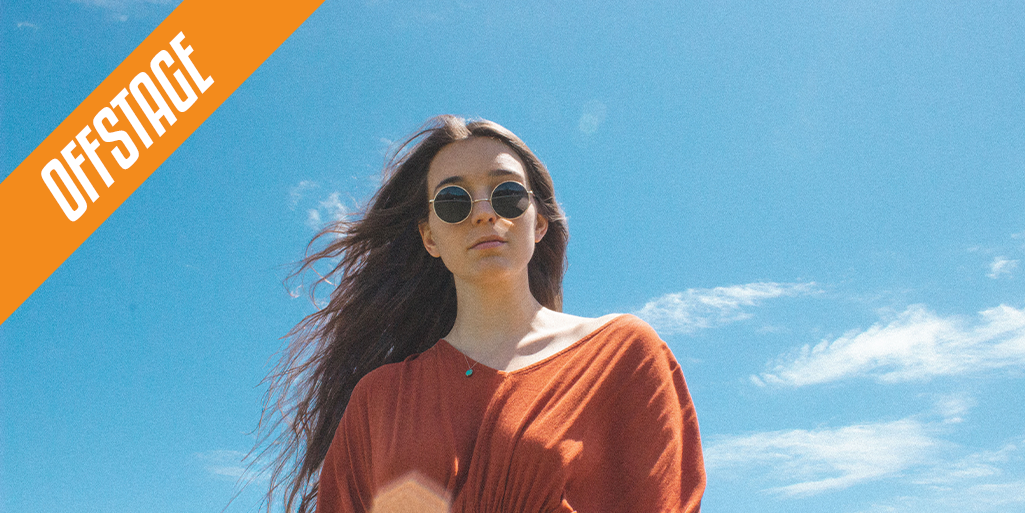 In honor of our 617 Day Celebration, we're presenting Offstage, the latest series on our WERS Music Blog. When the lights go up and the crowd goes wild, artists become performers. But when the lights go down and the audience goes home, our favorite musicians head offstage to resume their day-to-day. This series peels back the curtain and takes a look into the lives of some of your favorite artists from their point of view, through some of their favorite songs.

Coral Moons is a retro-rock band based out of Boston, MA, made up of Carly Kraft (singer-songwriter), Justin Bartlett (lead guitarist), Manuel Camacho (bass), and Kevin O’Connell (drums and keys). Each individual brings something unique to the band that helps Coral Moons push boundaries and blend genres. Carly has a more traditional ear – she grew up listening to a lot of ’70s rock (or “dad rock,” as she likes to call it). Those influences had a large contributing factor in inspiring the sounds behind the music. The other three members have a diverse background in music, pulling influences from jazz, metal, prog, folk, and R&B. Manuel even played in a Pink Floyd cover band when he was 18 in his hometown, Oaxaca, Mexico, that later inspired his deeper exploration into prog, math rock, and metal.

Mark your calendars for June 26th, when Coral Moons will be releasing their newest single, "Winnebago."

These songs, in particular, reflect a little bit of what’s keeping the band afloat during these times, while also keeping them inspired and curious:

The phrase “breathe in, breathe out” encompasses almost all of the “Johny Says Stay Cool” lyrics: It's a simple yet magnificently relevant phrase of the times. Babe Rainbow surely doesn’t make you think too hard about how you feel, but rather how you want to move. The sweet, sweet riffs bring fluidity that is uncontrollable, making all listeners throw their limbs around like nobody is watching. So, please proceed with caution, giving yourself at least 4 feet on each side of you to drop everything and DANCE.  -Carly

The short intro hook, followed by a powerful first chorus, are both incredibly unmistakable and undeniably effective. The raw nature of the recording makes every instrument and vocal melody fall perfectly in the arrangement, and the closing solo performed by Billy Preston is the icing on the cake for this instant and timeless classic. -Manuel

Oh, Big Thief, how I love you. This song has an energy I’ve missed since the days of their first release, Masterpiece. It starts off with raw drums and a sloppy guitar that immediately give off an attitude, which is quickly heightened by a disgruntled Adrianne Lenker singing lofty but relatable lyrics. As the song progresses, you can hear Adrianne get more and more disheveled, and this is intensified by the addition of Buck Meek singing in the choruses. It’s a recipe that feels like an argument between the two of them, adding a tension to the song that can only be resolved by the beautifully chaotic guitar solo at the end. It’s so awesome. -Justin

“Pin It Down” – Madison Cunningham

Madison Cunningham is the guitar hero every musician needs in their life. Her unmistakable complex guitar riffs in “Pin It Down” work seamlessly with her beautiful vocal melodies that land just in the pocket. The lyrics “I can’t pin it down” repeat over the chorus in the same way the thought crosses your mind in a loop about something you just can’t put your finger on. Undoubtedly this is only one of the many treasures Cunningham leaves us with from her 2019 album Who Are You Now. -Carly

“Roundabout” is practically a cliché for bass players – and for good reason – but every other part of this song represents incredible musicianship and depth that manages to stay relevant in the mainstream, which is a lot to say for an eight-and-a-half-minute song. -Manuel

This is by far one of my favorite songs right now. It covers a wide range of emotions that are held together by desperation. The hauntingly simple piano riff at the beginning is followed by lyrics that can’t help but bring out a sense of paranoia, and are emphasized more by the unpredictability of time between phrases. After the second verse, a shift in mood comes from the addition of horns in the lower register, adding an energy that almost makes you feel united with Thom Yorke’s lyrics as he sings “Together, Together.” By the end of the section, you feel like you’ve assembled an alliance, only to be taken by surprise when the lyrics “You got away with it / but we lie in wait” make you feel like you’re a part of something sinister as the full band comes in. It’s a beautiful recipe that I’m obsessed with. -Justin