Josh Groban “Bridges” Gap Between Performer and Audience at Garden

Going to a concert in a large venue like the TD Garden can oftentimes feel impersonal when it comes to the relationship between the performer and the audience.

The artist might say some stock greeting like “How you doing tonight (insert city name here)?” They might even reach a hand out to someone in the front row, but that’s about as much of a connection as they’ll make.

But not Josh Groban. Despite playing the Garden, one of the largest concert venues in Boston, Groban managed to connect with the audience throughout the performance.

It felt as though each and every one of us was alone in a room with him, having a friendly conversation while he serenaded us with songs from his newest album, Bridges, as well as some incredible Broadway covers and other fan-favorite songs of his.

Before Groban took the stage, Broadway actress Idina Menzel took to the stage in a glittery jumpsuit like the Snow Queen she truly is. She dazzled the crowd with her smash hit “Let it Go” from Disney’s Frozen, while also playing some original hits of hers. She closed out her set with Wicked's “Defying Gravity,” bringing the audience to their feet in a standing ovation.

After Menzel’s electrifying set, the crowd was amped up and ready for Groban to take the stage.

During set-up, an entire orchestra filed onto the stage, while members of the crew wheeled a Yamaha piano out to center stage. As the crew bustled around to make last-minute preparations, someone began to actually polish the piano to get rid of any fingerprints. This gave me the impression that we were in for some high-brow performance, and I had the sinking feeling that perhaps Groban was just going to sit behind the piano all night instead of engaging with the crowd.

However, when Groban finally came out, I was quite surprised.

He stepped onto the stage wearing black jeans, a t-shirt, and a bomber jacket as if he was performing at a bar instead of at the TD Garden in front of a whole orchestra. Glow stick-like lights in hues of red and purple hung from the ceiling, painting the stage in a warm, sunset glow as Groban sang “Bigger Than Us,” a song from Bridges.

When he finished, Groban took the time to converse with all of us in the crowd. He addressed how long it was since he toured in Boston, and expressed how glad he was to be back.

“I feel like this is holy ground, historic ground,” Groban joked. “I feel like you have to leave a pint of blood when you play a venue here.”

Groban also gave a shout out to any Mainers in the crowd, saying how excited he was to dig into a good Lobster on the tour bus later that night. “I’ll be wearing my plastic bib,” he said. The comment earned him many an appreciative-cheer from the crowd.

This comedic, conversational element continued throughout the entire set. After almost every song, Groban took the time to joke around with the audience.

Midway through the set, he spotted two ladies in the front row wearing tie-dye t-shirts with several images of his face on them. “I don’t think those are from my merch booth,” Groban laughed.

Even when he was signing, it was clear that Groban was trying to connect with the audience on a personal level. He often went to the far right of the stage, coming over to my section to wave at us and serenade us.

Towards the end of the set, Groban made his way to the B-stage out in the crowd to sing some Broadway covers.

He even invited Menzel back onto the stage to sing their song “Lullaby,” a piece they did together for an album of lullabies that went to immigrant children that were in holding facilities.

After performing a few songs on the B-stage, Groban actually walked through the sea of fans on the floor to return back to the main stage, giving people high-fives and big smiles.

When Groban returned to the main stage, he performed his biggest hit “You Raise Me Up.”

At first, the performance was a bit mellow, with Groban’s vocals accompanied only by his pianist and some violins from the orchestra. But suddenly, as the final chorus came around, the stage exploded; a whole choir lent their voices to amplify the angelic vocals of the song. The entire orchestra began to play. The crowd even got into it, with almost everyone belting out the lyrics as well.

At that moment, it was like we weren’t just at a Josh Groban show—it was much more than that.

Everyone was coming together under one roof to simply enjoy some fantastic music, checking personal beliefs and divisive emotions at the door. For an hour and a half, Groban brought people of all different ages, races, and creeds together under one roof, unifying us all under a love and passion for great music. 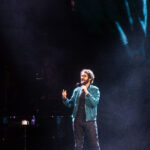 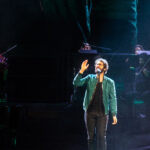 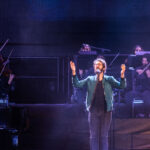 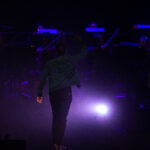 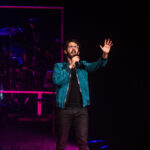 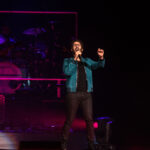