Florence and the Machine Brings the Ocean to TD Garden

Is Florence Welch even human? Because I would argue that she’s a fairy.

Prancing onto the stage barefoot in a seafoam dress, she, along with the Machine, entranced the audience in an ocean of soft melodies and smooth rhythm.

In a crowd filled with a current of teenagers and middle-aged couples, the band filled T.D. Garden with memories of childhood and the message of love and hope in hard times. This feeling of calmness also resonated within the design of the stage. It was set up like the beach, with wooden stairs cut in a curvature fashion encompassing most of the stage, while we, the audience, were the ocean Florence was singing to.

Although most of the songs performed were from their new album High as Hope, the band incorporated some favorites from previous albums, including Lungs and Ceremonial.

Right before “Patricia,” Florence took the time to advocate for women’s rights. She encouraged the audience to register to vote, and told the men in the crowd that it is important for them to support the equal rights of women. She then urged the crowd to remember that we as individuals have the power to change the world, even if it does not feel that way currently. Then, she dedicated the song to Patti Smith, and called on the audience to embrace life to its fullest.

Florence moved through the set in soft waves, all while incorporating small snippets of personal anecdotes.

At one point, she accepted a bouquet of yellow flowers from a fan, dubbing them her “anxiety flowers” and held an individual flower from the bunch every time she spoke to the crowd. She explained to the audience that she has no trouble singing in front of a crowd, but the talking part is where she gets nervous. So the flowers really help distract her from the daunting task of speaking to a large crowd. She was quite charming and incredibly humble, which was effectively made clear to the audience through her constant “thank you's” after songs, as well as her sweet anecdotes.

Perhaps the most striking moment in the concert occurred before “100 Years” when Florence asked for the audience to perform the most vulnerable act they could, and put their cell phones away.

She wanted us to engage ourselves within the experience of being at a concert. To her, the only way to do that is to put smartphones away. With that, the sea of iPhones was quickly put into pockets and purses. She noticed a fan in the audience with their phone still out and asked her very politely, “Would you please put your phone away?” She claimed that we should be the only ones that were allowed to experience that particular moment. No one would see the performance of “100 Years” we saw because Florence made sure that we were all captivated by her and the Machine, rather than by our phones, which were set to record.

Towards the end of the concert, Florence jumped off the stage and ran around the floor in a passion filled race. She placed herself all around the crowd and sang to her fans to their faces. There was a clear feeling of envy for those not lucky enough to be in that position, but there is no doubt that even those who did not receive that in-person experience left TD Garden feeling anything less than enchanted.

The entirety of the sixteen song set consisted of her dancing passionately and sporadically in the rhythm of her songs.

Her pirouettes, like a cyclone, enchanted the audience. Her leaps hypnotized the crowd. She effectively put all us into a dream-like state, which made leaving TD Garden to feel like I was waking up from a lucid dream. 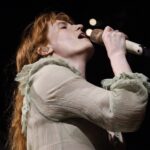 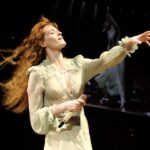 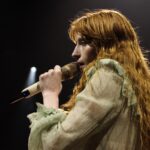 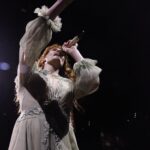 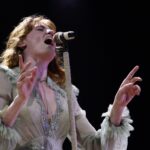