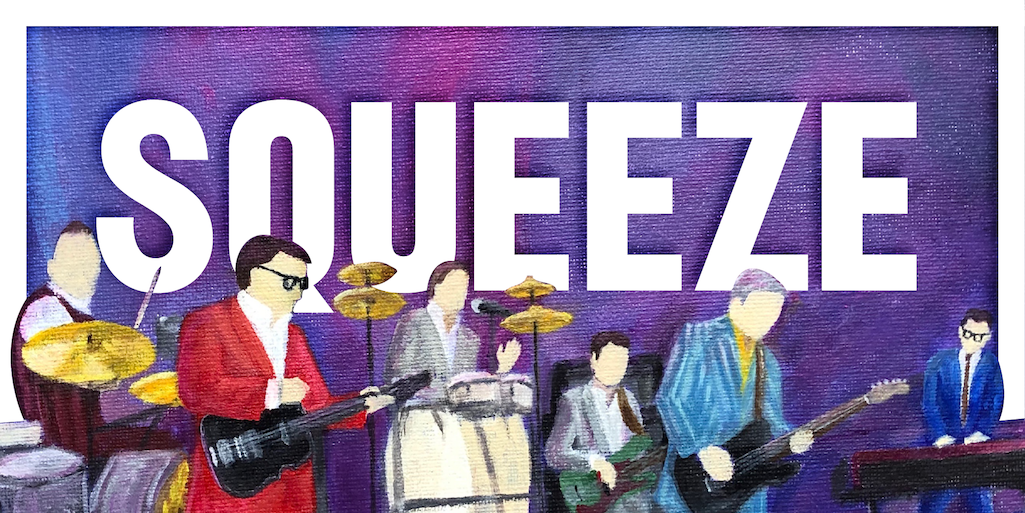 From the pubs of South London to Madison Square Garden, Squeeze has been crafting more than just songs. They’ve been penning, recording, and performing keen anecdotes of life that simultaneously fill your heart and get your feet moving. For anyone else, that would be no easy feat. For songwriting duo Glenn Tilbrook and Chris Difford, however, it’s simply what they do. The Squeeze discography spans almost five decades and integrates countless musical styles, but one thing that stays consistent is the character within each song.

Personally, Squeeze’s music gives me a lust for life like no other; It takes me from the streets of London to a bustling airport, to a holiday scene and back to my neighborhood – Only, through the Squeeze lens, my neighborhood seems a lot more intriguing. From Camber Sands to Waikiki and back to Clapham Junction, the journeys in Squeeze tunes are just as captivating as the band's history.

It was just a 50 pence investment that started Squeeze off. Chris Difford, seeking a guitarist for a band, stole a coin of said value from his mother's purse and used it to place an advertisement in a South London sweetshop in 1973 — an advertisement that Glenn Tilbrook was the only one to answer. We're lucky he did because, after that, Difford and Tilbrook began to write nonstop and formed the band they were aiming for. By 1975, Squeeze consisted of Difford and Tilbrook, along with Jools Holland on piano, Gilson Lavis on drums, and Harry Kakoulli on bass.

This original incarnation of Squeeze was big in the London punk scene, and after releasing their debut EP, Packet of Three, the band came out with the John Cale-produced LP, U.K. Squeeze, in 1978. Though Cale’s touch as a producer did not lend to commercial success, what did was the single that the band produced themselves: the banger “Take Me I’m Yours.” It even got them on BBC program Top of the Pops, which had been a long-time goal for the lads.

Squeeze was quickly gaining lots of traction in the U.K. Some might say it was their second album, Cool For Cats, that cemented them among the ranks of Britain's best-loved songwriters; It was on this album that Difford and Tilbrook honed their signature songwriting style. Chris Difford's lyrics created three-minutes narratives, with subjects ranging from motel desertions to London gangsters and kitchen-sink drama-inspired tales like on "Up The Junction." These narratives, set to Glenn Tilbrook's soaring melodies and infectious, inventive tunes, were the keys to a simply smashing album. Squeeze found success as a part of the U.K.'s new wave movement but even then had their particular flavor of new wave.

The band came out with another masterpiece in 1980: Argybargy. Besides having a great name, the LP is jam-packed with hits and first-rate deep cuts alike. "Pulling Mussels (From The Shell)" became quite a legendary tune, along with "Another Nail In My Heart," and – especially on the East Coast – "If I Didn't Love You." Argybargy was Squeeze's major breakthrough to U.S. audiences (though an American saying "argybargy" doesn't sound nearly as good as a Brit's pronunciation).

Following Argybargy's release, Jools Holland left the band to pursue a solo career centered around boogie-woogie piano and became a TV presenter (You can now find him hosting the BBC's Later... with Jools Holland and being cheeky on Instagram). For Squeeze's next release, the acclaimed singer and keyboardist Paul Carrack stepped in to replace him. The result was 1981's East Side Story: an album that demonstrated the band's ability to make any musical styling work. The album has elements of Western, rockabilly, and is more blended with their post-punk sound. "Tempted" has gotten major airplay stateside, but it's examining the LP as a whole that makes it such an artful, cohesive work. Songs off East Side Story, along with others from the Squeeze discography, were even adapted into a musical entitled Labelled With Love, which had a short run in London's West End.

1982 meant another album for Squeeze: the orchestrally-tinged Sweets From A Stranger, which spawned smash hit "Black Coffee In Bed" and numerous underrated tunes like "His House Her Home." However, it also meant an extensive world tour, during which tensions ran high within the band. After spending the better part of a year squabbling on planes and in dressing rooms, Squeeze split up at the tour's conclusion.

Such musical magnetism couldn't stay apart for long, however. During Squeeze's break, Difford and Tilbrook launched a solo project as a duo from 1983-84. Then, in 1985, the Argybargy lineup of Squeeze got together to play a one-off charity gig; that sparked the desire to reform, and so they did. By 1987, they recorded two commercially successful albums: Cosi Fan Tutti Frutti and Babylon and On. These LPs aligned more with the mainstream pop of the time (no one can escape the ’80s, after all), but still had a unique Squeeze flavor. After selling out Madison Square Garden in November 1987, you'd think the band would just keep on climbing.

The following decade held five more studio albums for Squeeze. These releases climbed high in the hearts of Squeeze fans, holding some of the most touching and emotional tunes of their catalog, but failed to climb to the same level on the commercial charts. After being dropped by their label twice, the band decided to break up for the second time in 1999.

Difford and Tilbrook pursued solo careers after Squeeze's breakup; The two mates remained good musical buddies, even collaborating on a few occasions and sitting in on each others' shows. For nearly a decade, Squeeze fans were antsy, eager to hear news of a potential reunion – news that finally came in 2007. In support of a recent compilation album, a new Squeeze lineup planned to embark on a U.S. tour but first played a warm-up gig at one of the first venues the band ever played, The Albany in Deptford, London. The reception, needless to say, was spectacular.

Reformed, touring, and with a PRS for Music award under their belt, Squeeze enjoyed marvelous success in the following years. 2010 saw the release of an album re-recorded greatest hits, titled Spot The Difference (get it?), and that wasn't their only groundbreaking release of that decade. Difford and Tilbrook sure had plenty of songwriting oomph still in them, and so came to be 2015's Cradle To The Grave, the first new Squeeze material in nearly twenty years. The Knowledge followed up that stunning effort in 2017, keeping hungry ears happy.

Since reforming, Squeeze has been touring tenaciously, hardly ever being anywhere but the road. They're set to embark on a summer 2021 tour with Daryl Hall & John Oates. What's marvelous, however, is that there is probably little difference between seeing a Squeeze show in 1979 and seeing a Squeeze show in 2021. The lads play (and write, for that matter) with the same vibrance as before, and something about the feeling encapsulated in a Squeeze tune transcends decades. You'll find your head bopping along with your heart beating when Squeeze is on, and chances are they'll never leave your heart.