She took the stage in front of a backdrop that was of two looming, haunting yellow cat eyes. In front of me in the crowd was a guy wearing a T-shirt that said, “Life is too short to listen to shitty music.” While it gave me a good laugh, it was also absolutely true—Adia Victoria brought a performance that was both chilling and powerful all-in-one. For being the first act of the entire festival, she used her dominating stage presence to hypnotize the crowd in front of her.

The drum felt like a heartbeat to the set, tying the audience directly to Adia and her band—like we were all one being.

As her black robe flowed in the wind, Adia sang with her deep vocals that matched the heavy drum beats and howling saxophones. Adia also stepped away from the mic to do a bit of dancing, smiling at her band as she grooved out to their instrumental parts. After a couple of songs, Adia spoke to the crowd, saying she and her band had “come all the way from Nashville to play” for us at Boston Calling—which of course got the crowd incredibly excited.

Though Adia did have a full band behind her, that didn’t stop her from breaking out her own guitars and jamming out on them. At the opening of one song, she strapped on a sleek black electric guitar and started playing some gritty riffs.

While Adia’s performance was fun and funky, it also got serious at times.

Adia dedicated her song  “Stuck in the South” to the victims of police brutality in recent years. I felt goosebumps trickle down my arms as I heard her sing the song, which was upbeat but clearly had some sinister vibes to it. She also dedicated a song to the women in Alabama who might be struggling after the Abortion laws passed in recent weeks.

At the end of her set, Adia played a song called “Devil is Alive” off of her new album Silences.

Adia told the story that once, her mom asked here why Adia sang about the devil so much, and Adia replied, “because the devil is always trying to talk to me.”

For someone who isn’t a huge country/blues fan, I absolutely fell in love with Adia during this set. She’s an absolute boss lady, and her set was a great way to kick off this festival weekend. 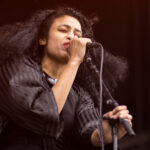 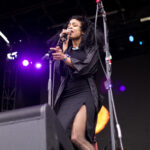 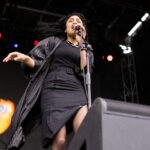 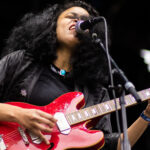 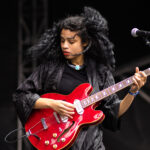 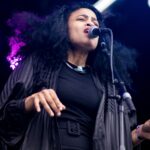 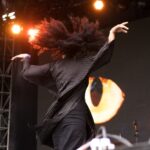