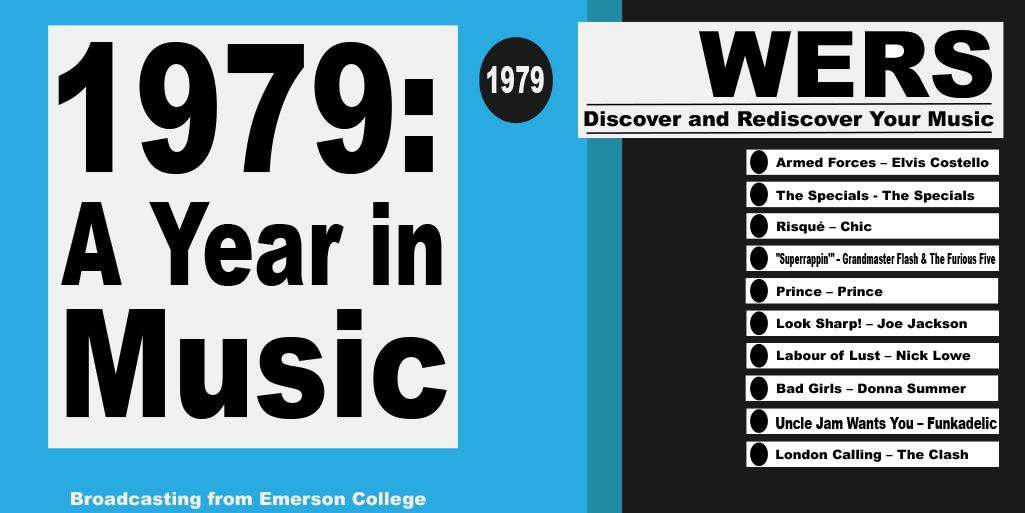 If I had been alive in 1979, I'm pretty sure it would have been the best year of my life. Regardless of my nonexistence at that time, I still consider 1979 to be one of the best years for music.

1979 saw the birth and growth of several genres that went on to be some of the most influential in music history. New wave and disco were among the genres evolving as a sensation, while genres like ska and hip hop had their genesis in '79. Besides that, plenty of artists were paving their paths that can't be confined to a genre.

When I scroll through a list of that year's albums, I find myself oohing and aahing at what untouchable, joy-inducing music somehow managed to come out all in that 12-month timeframe. In an attempt to garner the same reaction from you, I'm delving into four albums and one song that outline the year's general musical sentiment. Believe me, it wasn't easy to narrow down the list.

To make up for my lack of personal memories of this great year, I’ve enlisted the help of someone who was not only very much alive in 1979, but the hippest of the hip on the music scene of the moment: I called up my great-aunt Lisa in Queens. She happens to be the embodiment of the word “fabulous,” and she shared her experiences of the marvelous musical mayhem that happened that year, as a fashion student and aspiring musician in New York. Our conversation was full of plenty of singing interludes and wild stories, during which she concluded that there wasn't another year she's lived through that was as spectacular as '79. Let's look at some the finest musical strides taken that year: 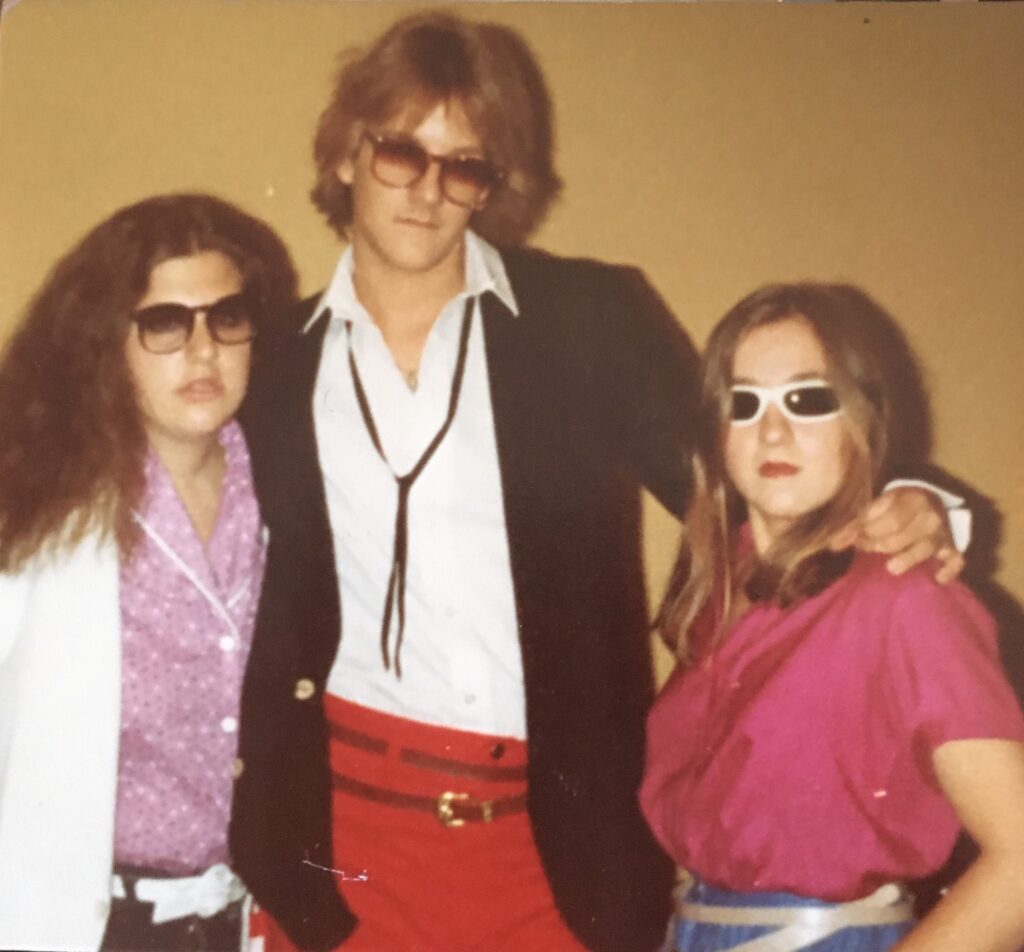 Great-Aunt Lisa (on the right) says of this picture: “1979 graduation: we didn’t go to prom. I took them dancing instead.”

1979 was the year that new wave became the genre. It went from being a purely underground movement to a massive commercial success. There were so many top-notch new wave albums that came out that year, with Talking Heads, Blondie, The Police, Squeeze, and more all climbing the charts with their releases.

When Elvis Costello brought forth Armed Forces, it blew the world away, Lisa included.

“We were listening to that album throughout the summer and thereafter,” she recalled. “It was music on such a level that these memories... They come back so vividly."

You could say this album shaped new wave. Compared to the punkier feel of Costello's past albums, Armed Forces is stunningly melodic, employing keyboards and organs alongside jangly guitars. It's songwriting at its most powerful, and most outspoken, too. The album deals with more political topics, such as widespread militarism, hence the title. Of the tracks on the record, "Oliver's Army" became a smash hit with "Accidents Will Happen" burning up the charts as well, alongside deeper cuts like "Busy Bodies."

Armed Forces is far from where Lisa's encounters with Costello end. Around eight years ago, she had the following occurrence while working at New York's City Winery.

“I go to the bar, and I see freakin’ Elvis Costello. So he starts looking at me and I start looking at him, ‘cause I know who he is, but then he’s looking at me, like, 'How do I know you?' I said, 'I really don't know, man.'"

"Listening to this album, I hear touches of ska, and huge touches of Beatles music, too," Lisa said. "[New wave] is like a combination of a lot of those British experiences." And as new wave rocketed that year, it became cemented as a part of British culture (and in turn an American sensation), spawning some of the finest songwriters to grace the earth.

Before 1979, the U.K. heard ska only from Jamaican imports. That year, however, was when 2 Tone Records came to be, and so the U.K. wave of ska definitively begun.

The Specials were essentially the frontrunners of the ska scene. Their eponymous debut record took ’60s Jamaican Ska and rocksteady music and added to it a punk edge – something that was previously unheard of. The record was the first to blend the lighthearted Caribbean feel with scenes of angsty British youth culture, like on "Do The Dog" and "Nite Klub." Finally, you could have a punky mentality and dance carefreely. Who could ask for more?

“A message… to you, Rudy…” Lisa sings. “That was all pleasant stuff, and it was sort of a nice break from the anarchists, the Sex Pistols – the punk rock, the piercings, and all that crap.” We marveled at how many infections punk’s going out of style saved her.

The Specials also included covers and reworkings of old Jamaican Ska tunes, like the killer tune "Too Much Too Young" and, as Lisa sang, "A Message To You Rudy." These allowed Jamaican Ska to have a marvelous resurgence that took the U.K. – and the world – by storm. 1979 sparked the beginning of many more global waves of ska to come.

‘79 was the year that disco reached the height of its popularity, just before its decline. Every club was pumping with the disco craze. Lisa, being a star of the New York club scene, knew disco better than anyone.

"Oh, there was The Pyramid, The Mudd Club, Palladium... and I lived at Studio 54," Lisa says. "I used to go to Studio three, four times a week." While she was rubbing elbows with famous faces at the legendary nightclub, there was plenty of Chic playing. Risqué has the strings and soaring disco melodies with strong roots in funk, making it the perfect dance sensation. "Good Times" became an anthem high up on the charts; "My Feet Keep Dancing" also stole the heart of many a dance fanatic.

Chic songwriter Nile Rodgers was no stranger to Studio 54. He had written their hit from the previous year, “Le Freak,” about being denied entry to Studio 54. Lisa can't relate.

"You see, there was this huge crowd of people outside on 54th Street, and the bouncer saw me," she says. "He's like, 'You can come in.' Everyone else was like, 'What?!'"

There wouldn't be disco, however, without disco's downfall.

"I do remember when disco started hittin'," Lisa says. "A lot of people went wild for it. But a lot of people were disgusted by it (laughs) because they thought it was like the death of real music.”

This sentiment was reflected in events like Disco Demolition Night. During a baseball game in Chicago in July 1979, crates filled with disco records were blown up, and thousands of attendees stormed the field to trample more discs. It was after this that disco's presence on the charts waned. The craze it created, however, will forever be an iconic era of music history, leaving its influence even on music today.

While Lisa and her friends were grooving the night away to disco downtown, uptown in the Bronx there was another musical revolution dawning in '79. Earlier in the ’70s, a Jamaican-born DJ called Kool Herc had thrown the very first hip-hop party. He spun funk records and sparked a new art that evolved in the years to come. MC culture came about as friends would join in the music with what we now call rapping.

Joseph Saddler, otherwise known as Grandmaster Flash, frequented these hip-hop parties and mastered the art of spinning records, revolutionizing DJ technology. He soon formed his hip-hop group with The Furious Five: five MCs that rapped over his beats. 1979 was the year they released their very first single, "Superrappin'." With rock-solid rapping and mind-blowing rhymes set against funky guitar strumming, it set the stage for the ’80s nationwide hip-hop craze and decades of great hip-hop to come.

Even Lisa was influenced by the hip-hop scene of the time.

Some artists just couldn't be confined to a singular current musical movement, and 1979 was their haven. In Lisa's experience, "no one really had any beef with each other. There was something about the creative energy of the year."

Prince revealed himself that year to be a true star with his self-titled sophomore album. Prince was more stunningly unique than his debut LP, combining elements of rock 'n' roll with funk, R&B, and disco, and laying his smooth falsetto on top of it all. The funky "I Wanna Be Your Lover" was Prince's first hit single. Tunes like "Why You Wanna Treat Me So Bad?" and "Bambi" have a hard-rocking edge in addition to the dancey beat.

No one else was making the music that he was. No one was shining quite so much, either; The man could play 27 instruments, was a guitar virtuoso, and on top of all that, became an icon of gender-, race-, and genre-transcending style in music and image.

There are too many great releases from 1979 to cover them all. David Bowie came out with the untouchable, inimitable Lodger that no one but Bowie could have done. XTC unveiled sharp, intellectual new wave with Drums And Wires. Earth, Wind & Fire did disco right with soulful, funky grooves on I Am. Long story short, the year made room for musical revolutions both individual and collective. The music made in 1979 built the foundation for the years of great music we've had past that, and the years of great music to come.

Madness – One Step Beyond